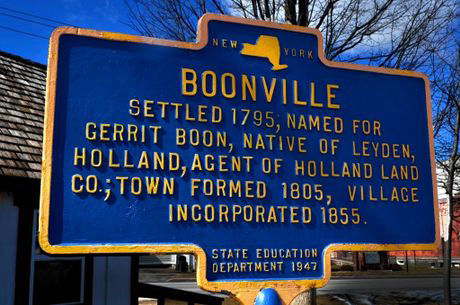 Boonville is situated on New York State Route 12, 32 miles north of Utica (NYS Thruway Exit 33) and 48 miles southeast of Watertown. The township, which consists of 4400 residents, is nestled in the divide between the Mohawk River and Black River on the southeastern portion of the Tug Hill Plateau in the foothills of the Adirondack Mountains. Although Indians had hunted on Tug Hill for centuries and French boots had probably tromped what is now downtown Boonville in the mid-18th century, the first attempt at establishing a permanent settlement here was made in the spring of 1796, when Gerrit Boon arrived. A native of Leyden, Holland, Boon was sent by Col. Adam Mappa, an agent of the Holland Land Company, to initiate land sales here. Credited with being the founder of Boonville, Boon is not listed as the first settler. That honor is given to Andrew Edmunds because he brought his family to the northern wilderness when he arrived with Boon. The men constructed a sawmill on Mill Creek but as they were adding a gristmill, a fire destroyed the entire project. As winter and a state of depression set in, the small band returned to Barneveld to spend the winter. The following spring they returned, rebuilt the mills, and welcomed settlers on behalf of the land company. In 1802, the first school was opened, and in 1805, the first church. On April 22 of the same year, the first town meeting was held. In 1812, the first two-story building was erected and still stands on the town square – The Hulbert House. The settlement was originally named “Kortenaer”, by Boon, in honor of a Dutch Admiral. The 1850’s were a golden decade for Boonville with a plank road, railroad, and canal, which connected the village to the growing city of Utica. The Black River Canal was designed to connect the Erie Canal (Barge) to the Black River. From Rome to Boonville, a distance of 25 miles, it was necessary to build 70 locks to lift the boats and water 693 feet. From Boonville to Lyons Falls, where the canals met, a distance of slightly over 10 miles, 39 locks lifted their cargo 386 feet. South of Boonville on Rt. 46, the Five Combines can be seen still. That portion of the canal needed five consecutive locks to handle the sharp incline of the land. A canal lock park may be visited three miles north of the village on Route 12. In 1855, the railroad was completed from Utica and the event was celebrated with much pomp and parade. The same year, the village was incorporated. Sargent’s Mill, a manufacturer of stools and chairs was established in 1851. Other important dates in the life of the villagers were: 1863- installation of the telegraph; 1897- completion of the first reservoir in the village water system; 1898- streetlights were provided; 1900- telephone lines arrived; 1904- the village homes received electricity. 1936- the first phase of the sewer system was built. Its enlargement, updating and repair is a continuing project. The construction of the village's sewage treatment plant in 1972 was a major accomplishment. At the present time, the village has state and federal grants for study and improvements to the village lines.